Through the integration and interpretation of all geo-scientific data, Terra Resources can assist in giving you the best chance of discovery.

Through the integration and interpretation of all geoscientific data, Terra Resources can assist in giving you the best chance of discovery.

As a group Terra Resources combines expertise from all geo-scientific fields. We specialise in evaluating exploration targets and the exploration upside in your project area.

In addition, we specialise in target generation, identifying other commodity opportunities and targets both within and outside your current areas of interest.

Providing their clients with expertise, outcomes and ideas that can be easily tested within your budget constraints.

Terra Resources are highly experienced in all geophysical techniques from petrophysical analysis to processing, interpreting and modelling of data.

Magnetic surveys can be used to map lithological changes beneath the Earth’s surface, to delineate structures, and in some instances to directly detect mineral deposits (e.g. those containing magnetite or pyrrhotite). They are conducted by measuring very small variations in the earth’s magnetic field with a magnetometer which may be carried by hand (in ground magnetic surveys), or mounted on a helicopter or fixed-wing aircraft (airborne surveys). The strength of the magnetic field is given in gammas or more commonly nanoTeslas (nT) (1 gamma = 1 nT).

Gravity surveys are also used to map changes in lithologies and to delineate structures. It is rarer that mineral deposits will directly give rise to gravity anomalies. However dense minerals such as those found in VMS or skarn deposits can indeed give rise to discrete gravity “highs”. Likewise zones of deep weathering over gold deposits may also be identified as discrete gravity “lows”. In essence gravity surveys reveal contrasts in the density of rocks below the surface. These variations are measured with a gravity meter, and usually described in milliGals (mGals) or gravity units (gu) (1 mGal = 10 gu). Ground gravity surveys are conducted by placing a gravity meter on the ground, and reading the Earth’sgravitational attraction at a particular point. This meter may be transported by foot, car or helicopter. Airborne gravity sensors (either gravimeters or gradiometers) mounted in a fixed wing or helicopter platform should also be considered – these surveys are best applied where ground access is limited or tight time constraints prevent acquiring a conventional ground survey.

Electromagnetic (EM) surveys are used to delineate changes in the conductivity of the earth’s surface.They are particularly useful for mapping changes in lithologies, and to delineate structures. They can also be used to directly detect mineral deposits, although generally a portion of a deposit must contain semi to massive sulphides in order for it to directly respond to EM surveying. A large variety of survey arrays can be adopted, depending on the objective of the survey. Commonly large “loops”, with high currents, operating at low frequencies are used to penetrate deep into the Earth. Similarly smaller systems operating at lower power and higher frequencies can be employed if depth of investigation is shallower. A large number of both ground and airborne systems are available. Airborne systems are attached to either fixed wing or are helicopter are heli-towed – technical specifications,terrain, budget and safety aspects should be considered during system selection. The strength of the electromagnetic field is usually measured in milliVolt/Ampere (mV/A). The properties of the rocks giving rise to the EM field can be measured in either resistivity units (ohm-m) or conductivity units (S/m) (resistivity = 1/ conductivity).

Induced polarisation (IP) surveys are primarily employed to directly delineate disseminated and/or massive sulphides. This is done by transmitting a current into the ground through a pair of transmitting dipoles, and recording the response at a receiving pair of electrodes. A variety of survey arrays can be adopted, although dipole-dipole, pole-dipole and gradient arrays are most commonly applied. Again survey geometries and methodologies can be varied according to the size and depth of target. But it is possible to detect sulphides at depths of 300 metres or more. A variation in the earth’s IP(chargeability) response is either measured in percent frequency effect (PFE), milliseconds (msec) or milliradians (mrad). By far the most common is either msec or mrad (1msec = 1.8 mrad). Resistivity data is always collected with IP data.

The Controlled Source Audio-Magnetotelluric (CSAMT) and Magnetotellurics (MT) techniques were introduced in the mid 1970’s as an EM method for finding mapping resistivity. MT is a passive technique which utilises natural energy sources (solar wind and lightning strikes), as opposed to CSAMT which involves use of a grounded dipole source.

Borehole surveys are used to map the in-situ physical properties of the surrounding rocks (nominally 50cm around the hole). Properties that can be measured include density, magnetic susceptibility, induced polarisation, resistivity, inductive conductivity, acoustic velocity and natural gamma. Some specific types of borehole surveys can be designed to look up to 50m away from the borehole. Downhole EM (DHEM) is often used in base metal exploration as a follow up tool to surface EM.

Many factors must be addressed when planning airborne geophysical surveys.

As with airborne surveys, many factors must be considered when planning ground geophysical surveys.

When to Conduct a Borehole Survey

It is important when accepting geophysical data that all forms of the data are received from the contractor.  Quite often the final data has been pre-processed and re-processed several times before the final product is reached.  More often than not a geophysicist will need to validate data integrity and will require raw data as collected in the field in order to do so.

Why use Terra Resources?

The Terra Resources team have a combined experience of over 100 years in the mineral exploration industry.

The team at Terra Resources can deliver at all stages of your project pipeline, from tenement evaluation to resource definition. 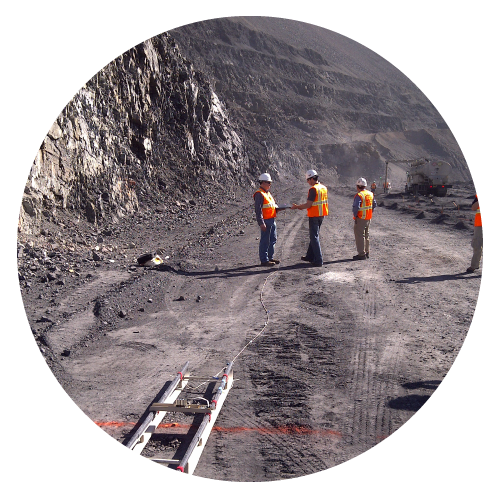