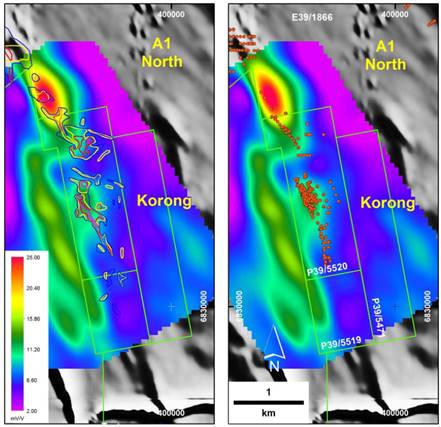 Syndicated Metals Limited (ASX: SMD – Syndicated or the Company) is pleased to advise that modelling and interpretation of the IP geophysical survey completed late last year at its 100%‐ owned Monument Gold Project in WA has revealed a new high‐priority gold target which it plans to drill test later this month.

Syndicated engaged respected Perth‐based geophysical consultants, Southern Geoscience Consultants, to review, evaluate and interpret the data from the IP survey, which comprised 47 line kilometres over 200 and 400 metre spaced sections. Southern Geoscience concluded that the survey data was good quality and that the survey had effectively tested the prospective stratigraphy at the Korong to A1 North area to a depth of ~300m. QC, data editing and 3D inversion modelling completed by Terra Resources was used to represent the data.

The known gold (and associated pyrite) mineralisation at the Korong prospect, which was targeted by Syndicated last year in its maiden drilling program (see ASX Announcements, 28 November and 9 December 2016) shows a weak IP and resistivity response which is well correlated with the strength and position of the mineralisation encountered in the drilling.