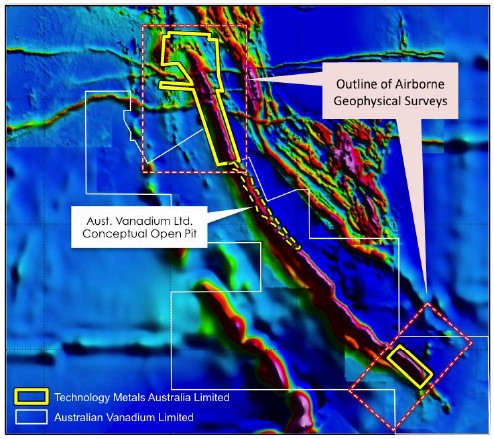 Drilling to commence on Gabanintha Vanadium Project in first quarter of 2017.

The Board of Technology Metals Australia Limited (ASX: TMT) (“Technology Metals” or the “Company”) is pleased to confirm the completion of the acquisition of The Kop Ventures Pty Ltd, and its wholly owned Gabanintha Vanadium Project, and the successful listing of the Company’s fully paid ordinary shares on the Australian Securities Exchange following the raising of $4.0 million (pre costs of the offer) from the issue of 20 million shares at $0.20 per ordinary share via an Initial Public Offer.

The Company has today executed an agreement to engage Magspec Airborne Surveys Pty Ltd to conduct a highly detailed low level airborne geophysical survey over the Gabanintha Vanadium Project. The high quality magnetic and radiometric data survey will be conducted on 25m line spacing and 25m flight height. The airborne magnetics will be acquired along line at a sample spacing of 3.5m. The survey is scheduled to be flown in the first week of January 2017, with processing and detailed interpretation to be completed by Terra Resources Pty Ltd in mid to late January 2017.

The ultra-detailed resolution of the magnetics will allow the highly magnetic vanadium mineralised gabbro sequence within the Company’s tenements to be mapped in 3D (~12.5m x 12.5m x 5m) and identify cross cutting structures and dolerite dykes. The magnetics will assist in projecting and targeting known mineralisation down dip to at least 200m.

Results of the detailed airborne magnetics survey will enable the Company to optimise its proposed maiden reverse circulation drilling program designed to define the extent and tenor of near surface vanadium mineralisation within the gabbro sequence in its tenements. Drilling is planned to commence in the first calendar quarter of 2017 subject to the timing of regulatory approvals. This initial drilling program is expected to consist of up to 2,500 m.