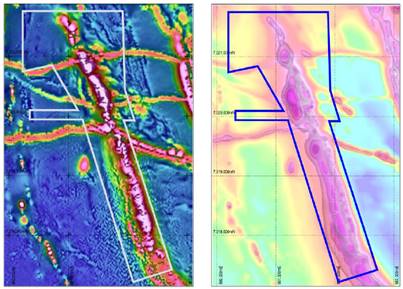 Technology Metals Australia Limited (ASX: TMT) (“Technology Metals” or the “Company”) is pleased to announce that it has received Terra Resources Pty Ltd’s (“Terra Resources”) interpretation of the data from the highly detailed low level airborne geophysical survey (“Survey”) over the Gabanintha Vanadium Project (“Project”). The Survey has been extremely successful in mapping the strike extent of the mineralised gabbro and defining the orientation of the massive magnetite zone towards the base of the gabbro unit which typically hosts the higher grade vanadium mineralisation. The Survey, flown in early January 2017, was conducted on 25m line spacing and 25m flight height, with magnetics data acquired along line at a sample spacing of 3.5m (see Figure 1 for outlines of the survey areas).